“He was shot 11 times and died on the street,” says Ismael Ramos of the day back in 2006 when Telésforo Ramírez was killed.

The two men were police patrol partners in Mexico City and the image of his colleague bleeding to death on the tarmac haunts him to this day.

No-one has been arrested for Officer Ramírez’s murder, something which still shocks his former colleague. “Nobody did anything,” Officer Ramos says, pointing out that the shooting is believed to have been carried out by members of a drugs gang.

“It was incredible. No-one seemed to care about his case,” he recalls of the lack of investigation.

Telésforo Ramirez’s case is by no means unique, as most murders of police officers in Mexico go unpunished.

And the number of officers killed is on the rise, according to Causa en Común, an NGO working to highlight the precarious conditions in which police forces operate in Mexico.

In the first half of this year, 235 municipal, state and federal police were killed, two more than in the same period in 2018. 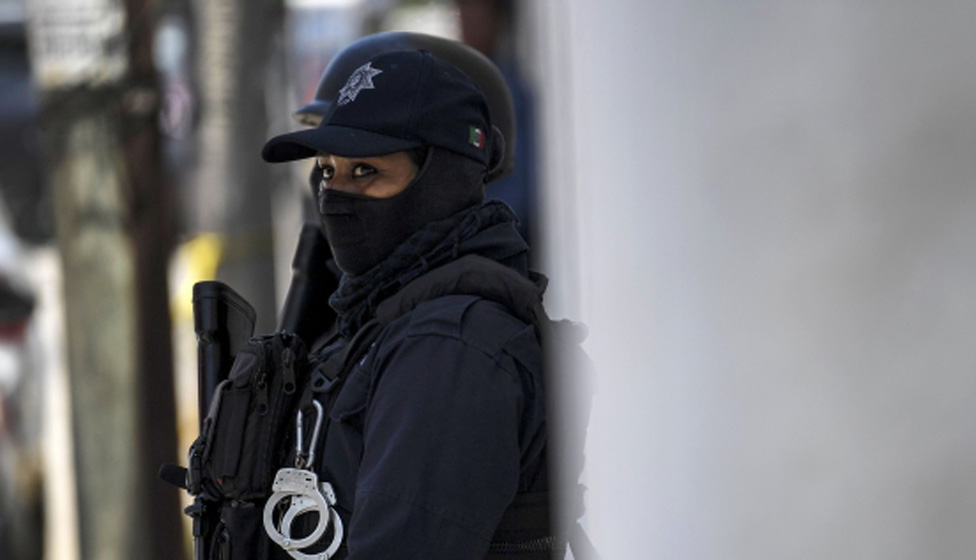 “In the United States, when a police officer is killed, there is an uproar within society. Here, there is disinterest in the lives of the police. It seems that nobody cares,” Ms Morera says.

The rise in police officers killed and the low regard in which law enforcement is held in Mexico are two of the factors making it extremely hard for the government to fulfil its promise to recruit 50,000 people to fill the ranks of the newly created National Guard by 2022.

President Andrés Manuel López Obrador announced his plans to launch the new civilian force days before taking office in December 2018. He said the National Guard would be key in driving down record-breaking levels of crime and violence.

From January to July 2019, more than 20,000 murders were reported, a 4% rise compared to the same period last year, which had been the most violent since records began.

Ms Morera says that President López Obrador has set his goal too high. “What people inside the National Guard have told us is that they’re not reaching the recruitment numbers that the president believed would be easy to reach.”

“If it’s a risky profession, you have to pay a fair salary, and the salaries being offered are not enough,” says the former head of the Centre for Research and National Security (Cisen), a government intelligence agency.

The average monthly salary in Mexico for entry-level officers ranges between $600 (£500) and $760 (£630). According to Officer Ramos, that is not enough to cover the basic needs of an officer’s family.

As well as only receiving meagre salaries, officers in municipal and state police forces often have to pay for their own equipment. Causa en Común found that nearly half reported having to pay for their uniforms and boots.

‘More of the same’

One of those who says he would never consider joining the National Guard is Marco Villafaña. The 33-year-old former state police officer says the new force is just “more of the same”.

Mr Villafaña worked as a policeman in Guanajuato, a city in central Mexico where officers are being killed in record numbers. Twenty-four were murdered from January to 21 August this year alone.

“I joined because I wanted to serve, but very soon you realise that there is corruption everywhere.”

After more than a decade in the force, Mr Villafaña became disenchanted with policing and started championing the rights of officers.

His contract was recently terminated by the police, a measure he says was taken in retaliation for him demanding better working conditions and which he is fighting in court.

Mr Villafaña is not alone in thinking the force he worked for was crooked.

Fifty-four percent of law enforcement agents said they believed their agencies were corrupt, according to a 2018 survey carried out by Causa en Común.

It is also an experience Officer Ramos says he had in Mexico City. “Every [state] government arrives and makes a deal with a given crime group,” he alleges.

He says he was denied promotions because he refused to cooperate with bosses who asked him to extort business owners in exchange for special protection.

It is an allegation that is backed up by the recent arrests in Mexico City of several police chiefs suspected of protecting local drug gangs.

Distrust of law enforcement is widespread in the capital. Recently hundreds of protesters took to the streets following allegations that a group of police officers had raped a teenager.

Six policemen have been suspended over the allegation.

Santiago Nieto, a senior official in the López Obrador administration, says that they are working hard to crack down on graft within the security forces across Mexico.

But for Prisciliano Flores those changes come too late.

The 54 year old who spent 25 years as a police officer in Mexico City has quit his job after he became disillusioned with the force.

He says for him it was the lack of basic benefits, such as good quality healthcare, which finally tipped the balance.

“You get to a moment when you say, ‘Is it worth it?’, because you’re not being treated fairly, even when you’re delivering results,” he says.

Coronavirus: Which countries have confirmed cases?

Coronavirus: All you need to know about symptoms and risks