“WFP lorries have resumed their distribution work after a 24-hour pause,” WFP spokesperson Elisabeth Byrs told journalists in Geneva. “This shows the difficulties that WFP and its humanitarian partners are facing in the field to help people, a lot of whom have been displaced many times.”

The development comes after what the agency called the “heavy bombardment” of Idlib, the last opposition-held enclave in Syria. It is also home to nearly three million civilians.

According to the UN Office for the Coordination of Humanitarian Affairs (OCHA), more than 370 civilians have been killed there since 1 December – with 49 deaths recorded between 1 and 5 February alone in areas controlled by non-Government groups.

“The people I’ve met were so visibly distressed, when I asked if they were OK they struggled to answer,” says Nuha, a field monitor for one of WFP’s partner organizations in northwest #Syria.#Idlib

Amid the ongoing hostilities, which follow almost nine years of war in Syria, UN Special Envoy for Syria, Geir Pedersen, has appealed for a lasting ceasefire, his spokesperson said.

Asked about the possible reconvening of the Syrian Constitutional Committee at the UN in Geneva, Ms. Fenton said that he had been working to “renew progress” in the political process.

“There is a need to build trust and confidence which can contribute to opening the door to a broader political process,” she maintained.

In a briefing to the Security Council last week, Mr. Pedersen noted that Syrian Government forces launched a ground offensive in the area following the dissolution of a 12 January ceasefire agreement between Turkey and the Russian Federation.

He also described attacks by various UN-designated terrorist groups during the same period, as well as direct clashes between Turkish and Syrian Government forces

At the same briefing to the Council, Mark Lowcock, UN Emergency Relief Coordinator, described a “humanitarian catastrophe” in Syria linked to air and ground strikes, massive waves of displacement and a major loss of life.

“We have seen chaotic pictures in town after town as vehicles line up in every direction trying to flee,” he said. “People who have just moved cannot find adequate shelter. Tens of thousands are crammed into schools, mosques and unfinished buildings. Many are in tents in the mud, exposed to wind, rain and freezing weather.”

According to Mr. Lowcock, more than 1,220 aid trucks went through the Bab al-Hawa and Bab al-Salam border crossings between Syria and Turkey in January.

have suffered in particular from the latest uptick in violence, WFP’s Ms. Byrs said.

“Heavy bombardment in the city of Atareb over the past couple of days spurred significant population displacement. So far, airstrikes and armed clashes in north-west Syria have displaced over 800,000 people since December 2019.”

Amid harsh winter conditions and sub-zero temperatures, humanitarians have repeatedly urged the warring parties to respect international humanitarian law, in particular by safeguarding civilians, hospitals and other public infrastructure.

“I can just say that their situation is really dramatic,” Ms. Byrs said. “You can imagine with those freezing temperatures, the situation for families, for those mothers who try to feed their children, and the children have to walk and be on the move all the time.” 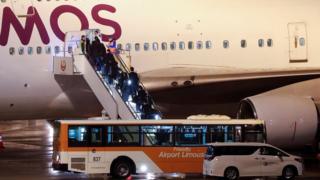